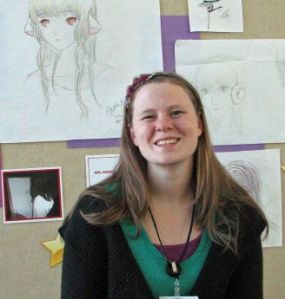 http://bit.ly/nplDressen
Mclean grew up with a basketball in her hands. Like the rest of her hometown she lived and breathed the sport and was a huge fan of the local Defriese University team. Her parents used to own and run a family restaurant, her dad the head chef and her mother in charge of finances. It all ended following her parent’s divorce, which was due to Mclean’s mother’s scandalous relationship with the Defriese basketball head coach. Angry about the split-up and her mother’s role in it, Mclean shuns both her mother and basketball and moves in with her father. This means living a life on the road, as her father took a new position as a traveling restaurant consultant. With the new job, Mclean and her father live in four different cities within two years. While Mclean’s father is busy fixing restaurants, Mclean is trying to fix herself at each new school, trying on different personas: a drama club member wearing black and being a part of stage crew, a peppy popular cheerleader, and a “joiner” an all around club committee member that joins and participates in everything. Who will Mclean be at her most recent school in Lakeview? And will she make-up with her mother? Read “What Happened to Goodbye” by Sarah Dessen to find the true power of friendship, family, and love on one’s identity.